We have many types of scorpions in Arizona. Scorpions don't bite (no teeth), but they do sting. If you remain calm, it is not difficult to treat a scorpion sting. Even if you are stung by the Arizona Bark Scorpion—the most dangerous and venomous of our scorpions—it is not likely to be fatal or even to have long-lasting effects. Local medical centers are familiar with the treatment.

Can You Die From a Scorpion Sting?

Let's get this out of the way early. The answer is, yes, people who are allergic to stings and bites, or people who have other medical conditions or weak immune systems may die from a scorpion sting, but it is not likely that a healthy adult would die from a sting. Babies, small children, and the elderly are more at risk, but even then, fatalities are rare.

Are All Scorpions Dangerous?

Many people who contact me think that every scorpion they come across is the dreaded Arizona bark scorpion. That's not the case, but it is prudent to err on the side of caution if you are stung. If you want to be able to recognize scorpions when you come across them, here are some identifying features of the most common Arizona species.

What Are the Symptoms of a Scorpion Sting?

It is important to recognize scorpion sting symptoms: immediate pain or burning, very little swelling, sensitivity to touch, and a numbness/tingling sensation. More severe symptoms might include blurry vision, convulsions, and unconsciousness.

What Should I Do After a Sting?

If you are stung by any scorpion, including the venomous Arizona Bark Scorpion, here are some immediate actions you should take as outlined by the Arizona Poison and Drug Information Center:

Disclaimer: I am not a doctor. If you are stung by a scorpion and are concerned about your symptoms, call the hotline as mentioned above, contact a medical professional or go to an emergency room.

Last updated: July 11, 2017 – If there’s anything you need to know about defeating a bug infestation in your home, it is that most of your efforts will be futile unless you destroy the nest itself. This similarly applies to an ant infestation.

Even if you’re constantly killing or warding off the occasional ant trails with insecticides or homemade ant killers and you’re thinking “Hurray, I’ve killed off at least a hundred of these buggers!”, the truth is that there will still be tens of thousands of these bugs well and alive in their colony just waiting to swarm the next crumb of bread that you leave out in the open. Plus, a single ant queen can spawn out thousands of eggs every single day, so it’s essentially an endless battle if you don’t do it the right way. The only way to overcome this infestation is simply to wipe out the entire colony. 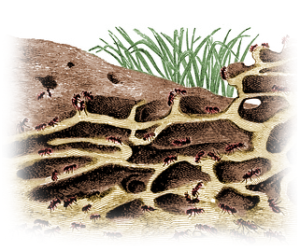 The question then remains: How do you know where the colony is or whether you can even reach it at all? The answer is that you don’t need to. For all you know, there could be multiple colonies that exist in the many areas of your house and they are usually very well hidden in between wall cracks or hard to reach places. To kill off all these ants and their queen, there’s only one viable option and it would be by using poisonous ant baits.

How Do These Baits Kill Ants?

As if we didn't have enough critters to be worried about--scorpions, rattlesnakes, killer bees and black widow spiders--a new natural enemy has surfaced, and it is no laughing matter. The fire ant has been a hot topic of conversation since a napping three-month-old baby in the Phoenix area was killed by hundreds of stings from fire ants. This is an unusual case, and neither the Arizona Department of Agriculture nor Arizona State University entomologists have been able to explain why the fire ants swarmed in this particular situation. Since this type of occurrence is rare, it is best not to panic if you see a few fire ants. It is prudent, though, to be aware of them.

Fire ants include a large group of reddish-brown to black ants. There are two types of fire ants we need to be concerned about. There are the Red Imported Red Fire Ants (Solenopsis invicta) and Southern Fire Ants (Solenopsis xyloni). In the case mentioned above, the culprits were the Southern Fire Ants, which are native to Arizona. To be honest, it is difficult for someone who isn't an ant expert to distinguish between the critters. Red Imported Fire Ants have been targeted for extinction by the U.S. government, and it has been trying for years to stop their migration across the country with limited success. We know there have been Red Imported Fire Ants documented in Arizona. According to The Arizona Department of Agriculture, our state has been successful, so far, at eradicating the highly aggressive Red Imported Fire Ant when it has been identified. Although Southern Fire Ants are common here, and not as aggressive as their Red Imported relatives, as non-experts in the study of ants we should probably treat them all with caution. After all, I've read that it takes many samples for even experts to tell which ant is which!

If You Are Stung By Fire Ants

If you notice blistering occurring after being stung or after stepping on an ant mound, seek out medical advice. Some people experience an allergic reaction to a fire ant sting. Symptoms may include sweating, slurred speech, chest pain, shortness of breath, hives, swelling, nausea, vomiting, and/or shock. People exhibiting these symptoms after being stung by fire ants should get medical attention immediately. For more information you can contact the Arizona Poison and Drug Information Center at 1-800-222-1222 or 520-626-6016.

The death of the infant in this case was a tragic aberration. I was unable to find any record of another death in Arizona resulting from stings of the Southern Fire Ant. You can be assured that the experts will perform their due diligence in the investigation. There's no reason at this time to believe that there is any epidemic or infestation of deadly fire ants in the Phoenix area.

Yes, we have scorpions and bees that sting. We have rattlers and spiders that bite. Add fire ants to our list of desert creatures that we need to understand.

Special thanks to Dale Ward of Tucson (Ants of Arizona) for his assistance with this feature.